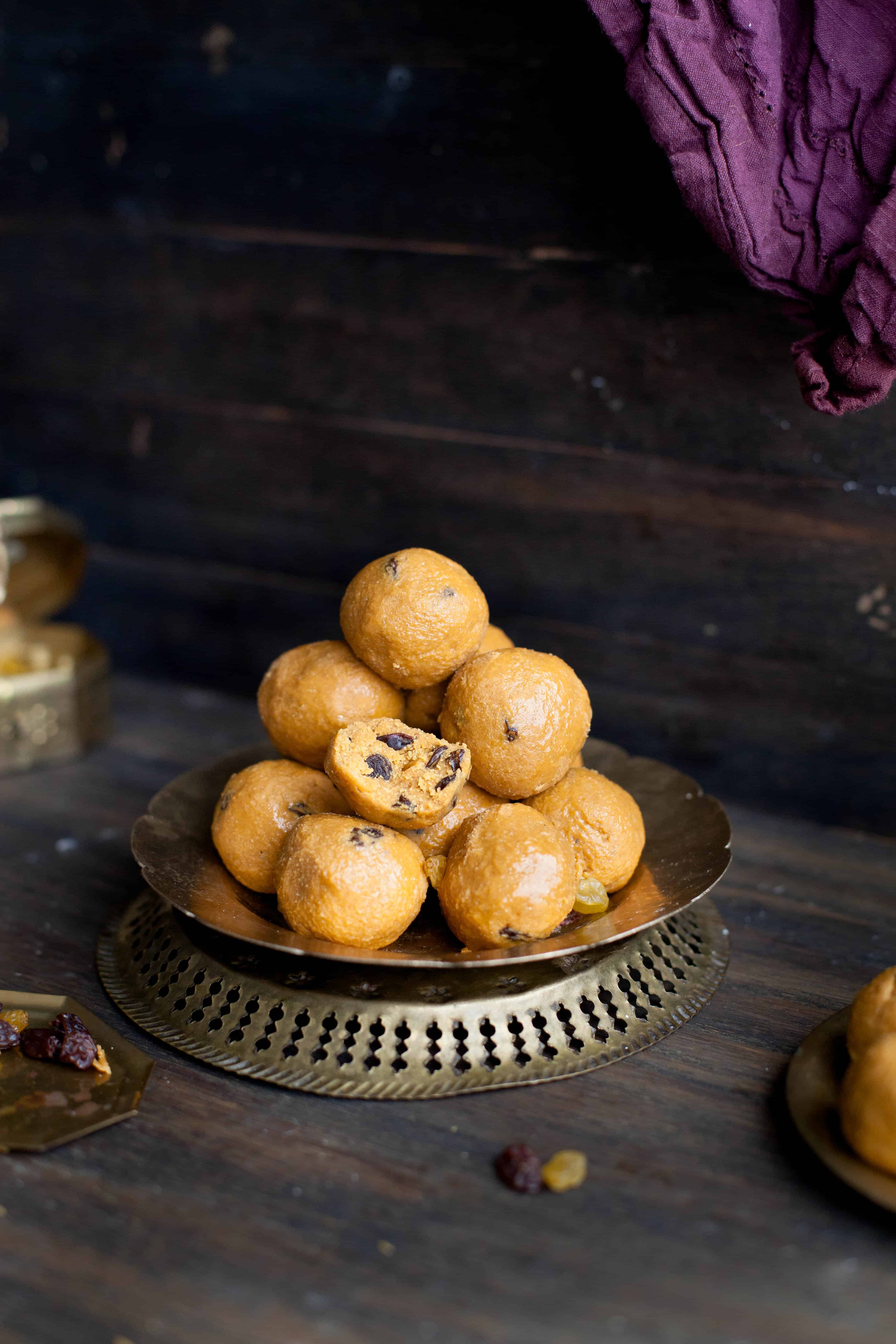 I can't even begin to describe how the house smelled whenever badi mummy (my grandma) used to make besan ladoos. If you have ever worked with besan (chickpea flour) and tried roasting it, you would know what I mean. It takes an extra sniff to brace in all of it, embracing it in all your senses. It's the aroma of home - sweet & comforting. If there is any indian mithai (sweets) which I choose over gulab jamuns, it has to be this. I just said that. 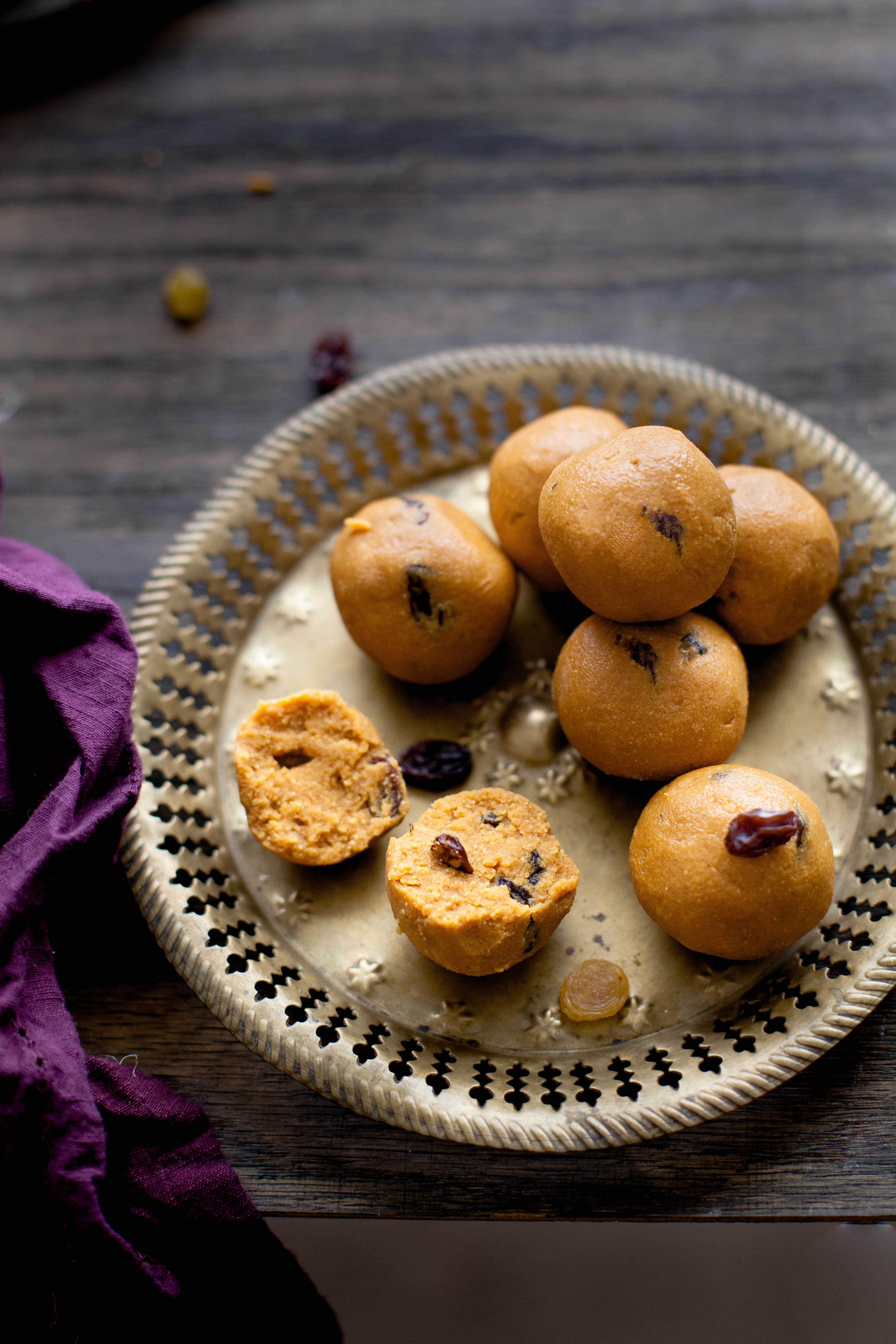 Similar to a never empty cookie jar on kitchen counters, there was hardly any time when besan ladoos were not stocked in my grandma's house, the only difference was that these were securely kept in a stained brass jar on the top most rack in the kitchen. Just so that we only eat them after having meals and not as a meal- highly addictive as they were. Sneaking in a couple of them with cold unsweetened milk before leaving for school is one of the best ways we relished them as kids.Some of you might contest how something loaded with ghee and sugar could possibly be a morning ritual but at times few foods become such a part of you that the nourishment becomes secondary, it's just the comfort of eating. Similar to donuts and coffee,I guess. Plus childhood could absorb in all those calories. 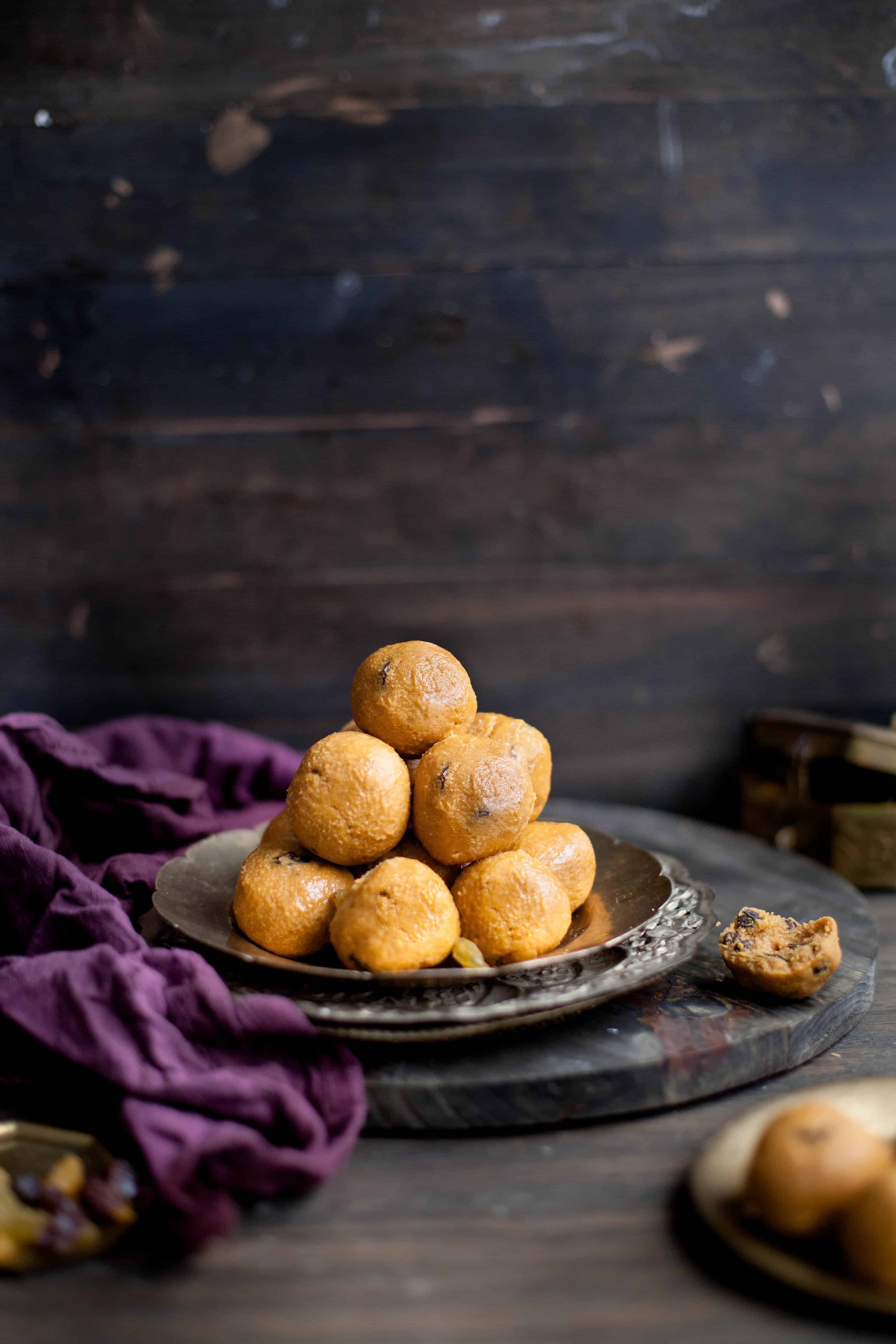 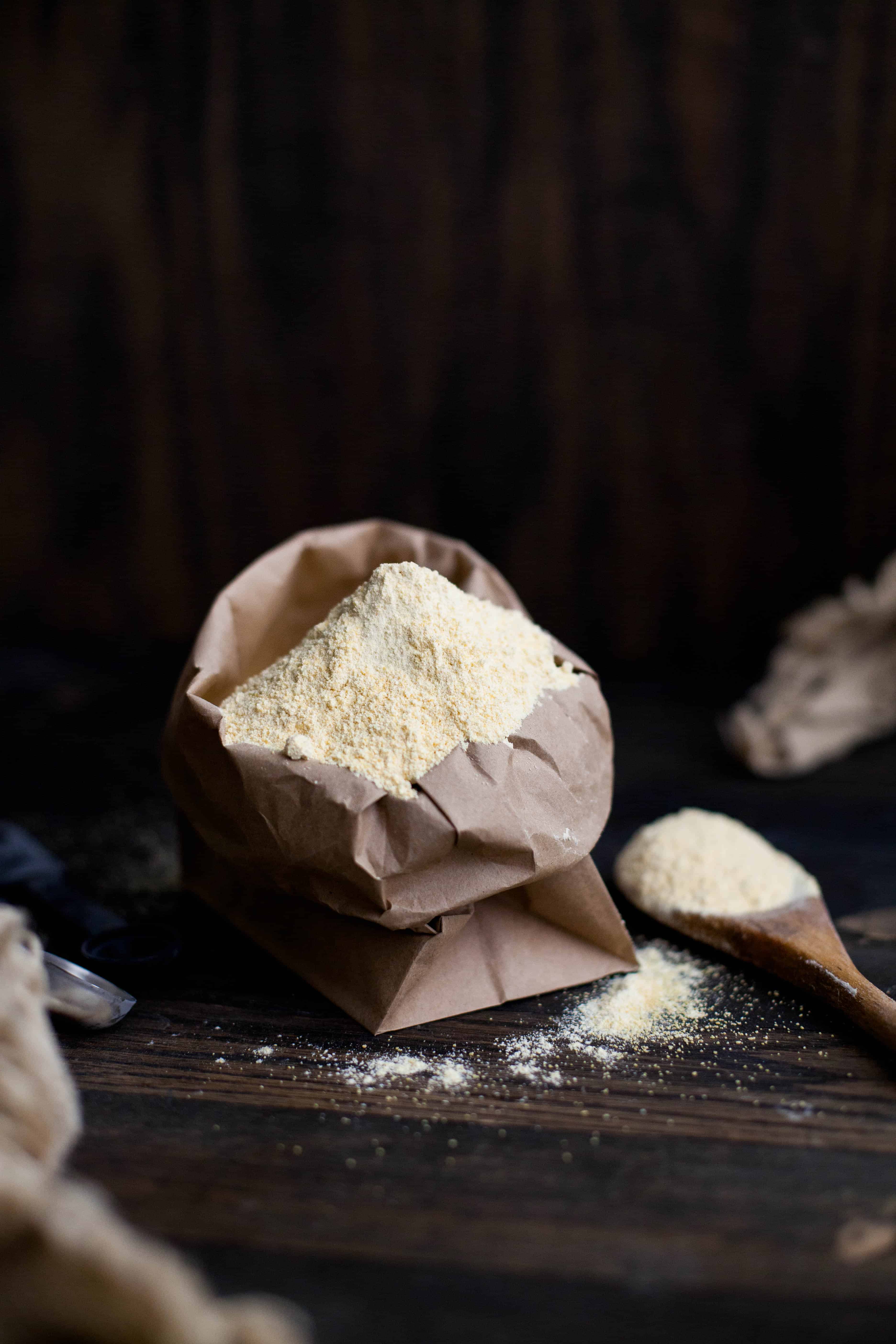 I think I never made besan ladoos after getting married.When mom visited me last year during my pregnancy days, she made a big batch and I was hooked again. Mindful, clean, healthy eating is fine but lets keep it away from the comfort such recipes evokes. This is one of those few recipes which takes me back in time, engages me in the memory of those years. I have put together a batch almost three or four times in last one year. Not that I eat them for breakfast but its a thorough guilty pleasure when I need sugar. 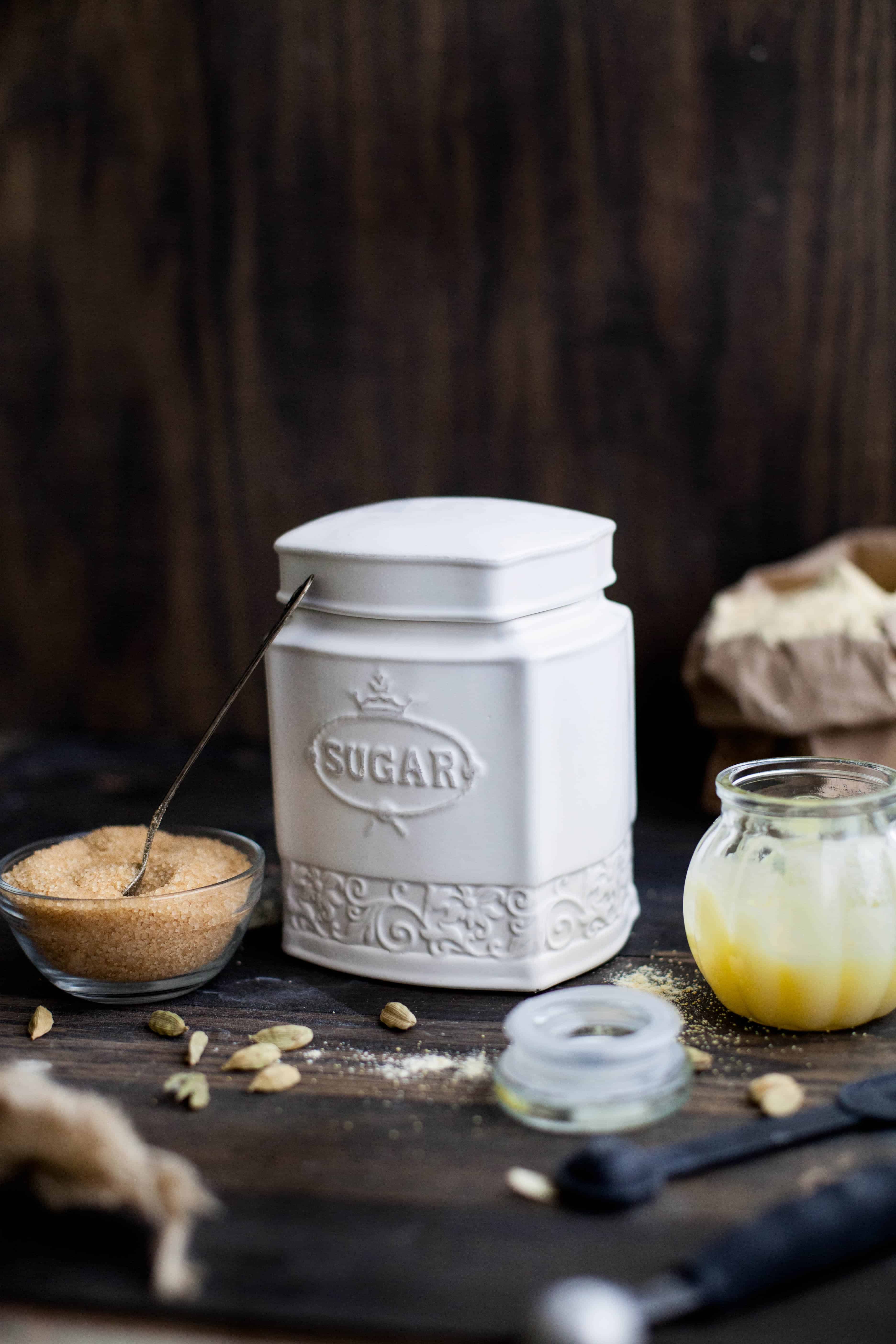 Besan(chickpea flour) ladoo (sweet confection) is an extremely popular no-occasion mithai  in India.In homes these are served just to cater to sweet tooth after meals, for casual snacking or as an instant energy boost.Requiring just four ingredients, the recipe is very forgiving and gluten-free. Coarse chickpea flour is roasted in ghee till it starts emanating a nutty fragrance. Sugar, nuts and dried fruits are added and then the flour is rolled into small dumplings.  Sweet and simple. You could add in a variety of nuts and seeds but I like to add only raisins. If the flour is not slow roasted properly, there will be raw after taste so bring lots of patience when you decide to make these. Other than that the recipe is a no brainer. 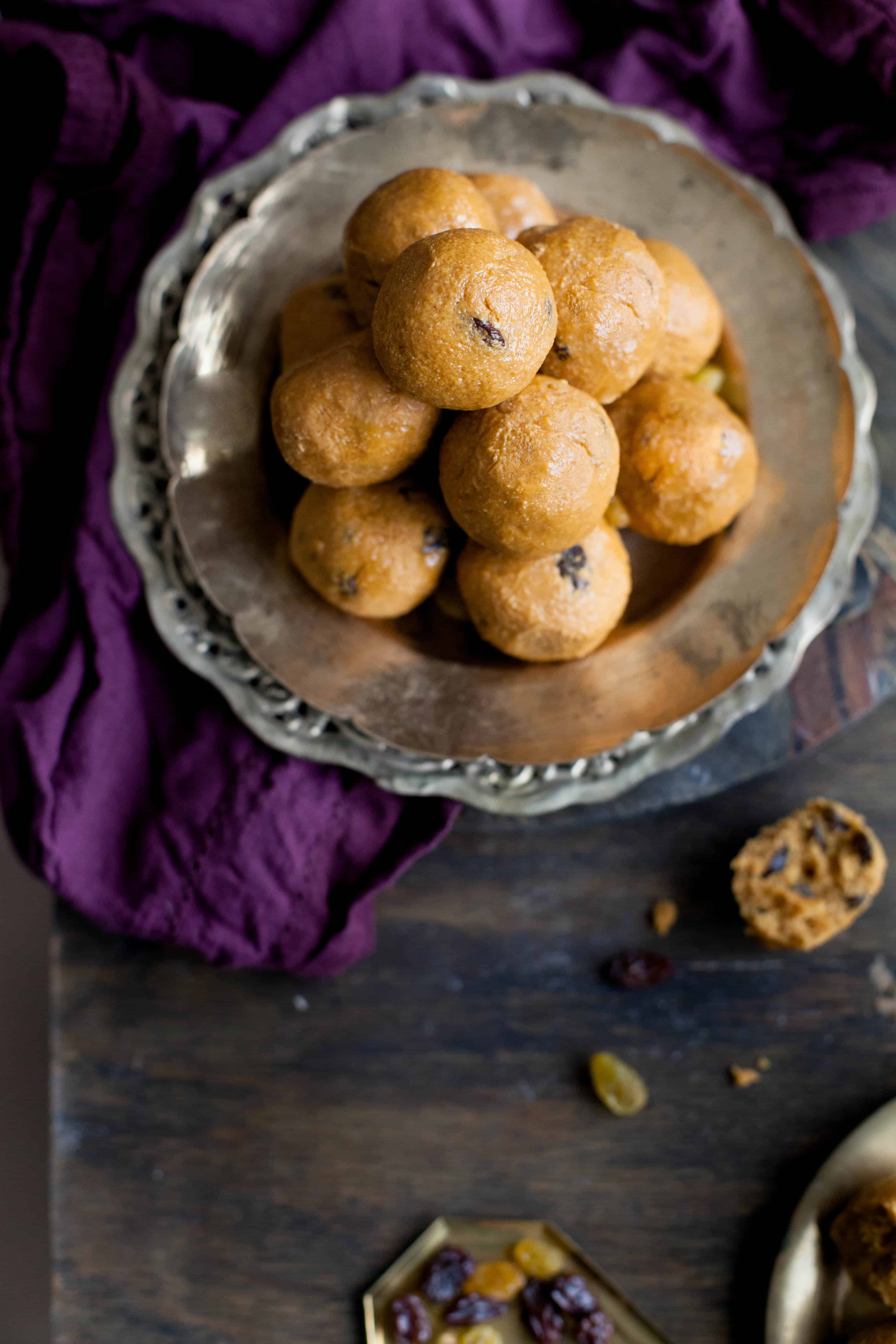 In a large pot, combine ghee with besan and using your fingers combine well so that there are no lumps.  Transfer the mixture to a heavy bottomed kadhai/wide pan. Put the kadhai on stove and let heat on medium low for 5-7 minutes. When the kadhai has warmed up, reduce heat to low.

Cook on a low flame, stirring continuously. The slow roasting is extremely important so as to ensure that the raw taste of besan is gone. Besan will slowly start changing color and you will smell a nice aroma. After about 30-35 minutes of slow roasting, you will also see ghee starting to separate on the sides. Take off the stove, mix in the raisins (or nuts if using) and set aside to cool.

While the mixture is cooling, crack open the cardamom pods and in using mortar and pestle crush the seeds to a fine powder.

Once the roasted besan is cooled (but not cold) and easy to handle, add in the sugar and cardamom powder. Combine nicely so that everything is mixed together. Make even sized balls. You can moisten your palms with little melted ghee (if required) while making balls.

Store up to two weeks at room temperature.

Hi, I'm Tanvi! If you love Indian food, you are at the right place, browse through hundreds of authentic Indian recipes