Kaddu ki sabzi is a indian vegetarian side dish made with pumpkin and spices. This north indian style sweet & sour (khatta meetha) kaddu is simple and straighforward to make and pairs amazing with pooris or as a side to rice, rotis or paratha.

You are going to need 20-30 minutes to make this indian pumpkin curry (dry) with pantry staples.

One of my favorite, no points for guessing :), things about Autumn is pumpkin, how cliche, right? I look forward to cooking with pumpkin-curries, stir fries, baking.

This sabzi goes so well with a bowl of dal and rice or with thin plain rotis or pooris. I was out of jaggery powder today and finished it with date syrup for the smoky sweetness along with mango powder (amchoor) & little kala namak(indian black salt).There are savory, sour and sweet elements in this dish. So so good.

I am finicky about texture in food so I keep a close eye and cook the pumpkin just till its tender. You can cook it little longer if you prefer a more soft vegetable. The finishing touch of ground spices adds so much warmth here.

What is Khatta Meetha Kaddu?

In Hindi, Kaddu = Pumpkin and Sabzi/Sabji = Curry (dry or saucy). Khatti Meethi sukhi kaddu ki sabzi has a sour, spicy and tangy flavor profile. It is one of the most delicious ways one can cook pumpkin. In north indian states of Punjab, Delhi and Uttar Pradesh, it is most popularly served for bhandara during festivals along with poori, aloo ki sabzi and raita.

Khatta means sour. Meetha refers to sweet. In this kaddu recipe, the addition of kala namak (tangy black indian salt) and amchoor (dry mango powder) adds the sour element. You may use a little tamarind or lemon juice if you wish.

For the sweetness, I like to use powdered jaggery, however sugar can be used as well. The recipe uses common indian spices like red chili and turmeric powder. Another ingredient is nigella seeds which complement the taste of pumpkin and really add a ton of flavor.

Another thing I want to mention about my recipe is that it is a mix of Punjabi and UP style kaddu ki sabzi. My paternal grandmother hailed from Uttar Pradesh but we lived in Delhi(hence th Punjabi influence). And before you ask, like all over India, recipes from different states differ in the same region. So while UP style kaddu wont add garlic or kasuri methi and maybe cook make it in ghee, mom's recipe is a fusion of sorts- however super delicious, I promise!

Why you will love this recipe

What kind of pumpkin to use

Back in india, hara kaddu with green & yellow speckled skin is used for making this sabzi. Green kaddu is not sweet or stringy. It has a crisp texture and I love using it whenever I can find it. The skin is just so delicious and cooks in no time, so don't peel it.

If you want to make it on a very sweeter side, you can use peela kaddu with orange/yellow skin as well.

However, the flavors go with frankly any kind of pumpkin! I have made this with green(hara) kaddu, peela (yellow) kaddu, kabocha squash, acorn squash, red pumpkin, butternut squash as well as honey nut squash. Depending on the natural sweetness of the kaddu, you can adjust the jaggery levels. Just keep in mind that the pumpkin is not too stringy that's all.

How To Make Kaddu Ki Sabzi 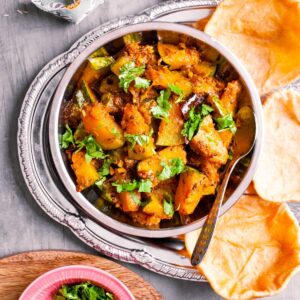 Kaddu ki sabzi is a indian vegetarian side dish made with pumpkin and spices. This north indian style sweet & sour (khatta meetha) kaddu is simple and straighforward to make and pairs amazing with pooris or as a side to rice, rotis or paratha.
5 from 3 votes
Print Recipe Pin Recipe
Prep Time 10 mins
Cook Time 20 mins
Total Time 30 mins
Course Side Dish
Cuisine Indian
Servings 4
Calories 161 kcal